The spirit of God is the life of nature, consciousness 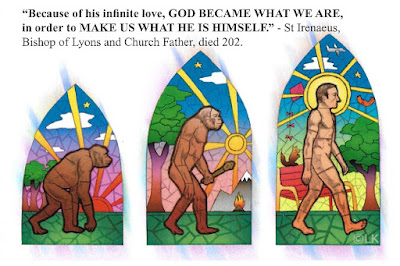 A crematorium worker told me he didn’t believe in God, claiming there was no evidence, so I asked him if he had a mind.  He said yes, and I asked him how he knew. “I experience it,” he said.  “And I experience God,” I replied.  Later, I was invited to explore the furnaces which burn away human flesh, and the machines that crush up human skulls and bones into powder.

Angelos means messenger, and in the Bible, messengers interact with our minds, in dreams, visions, and the events in nature. The theologian Thomas Aquinas said Angels learn though intuition, they don’t have schools and books, we encounter them intuitively, in prayer, creativity and ritual.

Aquinas also warned that if you ever make a mistake about nature, it will lead you to make another mistake, about God. The mistake is regarding nature as unconscious. Not only is nature conscious, but God is consciousness, and as the Orthodox Church says; “the spirit of God is the life of nature,” so true life is union with God’s consciousness.  All experience is only infinite consciousness, God’s infinite being.

Creatures cling to life, but life does not cling to creatures, and as St Paul wrote to those Corinthians; “Flesh and blood cannot inherit the kingdom of God,” he said, but “if there is a natural body, there is also a spiritual body.”   This means nature transcends the gross physical body, the mental body, the subtle energy body. If this sounds irrational, or unscientific, remember...

Biologist Wallace, who discovered evolution with Darwin, thought intellectual beings guided it. Quantum theory has made Physicists realise matter is a field of invisible interactions. Einstein thought about light being timeless, how light moves from sun to earth in no time, but to external observers like him, it seemed to take eight minutes.

What if Angelic, internal being, light, like photons, moves timelessly without mass in space, in the kind of life Jesus called eternal?  An Angel could not help but love you, and inspire you to rise above the lower angels of your own nature, lower because motivated by fleshly pride greed and fear, not by a love stronger than death.

Traditional theology has nine levels of consciousness governing this universe, the top three called cherubim, or divine knowledge, seraphim, or love, and thrones, or presence. Knowledge, love, presence surround you, and when the Bible asks; “What is man, that thou art mindful of him,” it answers, “we are a little lower than Angels.”  Jesus said in resurrection, we are as the angels.

So despite vulnerability or pain, don’t cling, love is letting people be where they are, as 1 Corinthians says, a perishable body is sown, an imperishable body raised. True nature is peace, hidden with God in Christ (Col3:3). The world cannot give this peace and it cannot be grasped or defended.  All experience of the apparent physical mental world is only infinite consciousness, God’s infinite being.  Do you live like this?
Posted by RDF at 13:47