a God is for life not Christmas - leave this world alive 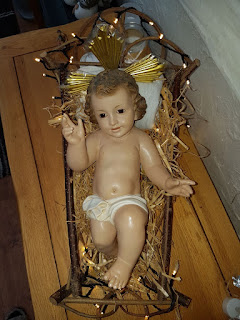 Great American Psychologist William James, who wrote the Varieties of Religious Experience, said all human beings are hardwired for the experience of something more. But what is this something more? Is it family and friends? No.

The Professor of Islamic Studies, Mona Siddiqui, a Muslim, was never exposed to the Nativity in religious stories her Mother told her, but she came to recognise the sanctity of togetherness in the Holy Family, Jesus, Mary and Joseph.

I am not convinced.  Jesus is not concerned about attachments. He is disparaging and sometimes outrightly dismissive of his family.  He says no Prophet is recognised in his home town, and he is unable to do miracles where people think they already know who he is.

In Matthew’s gospel, talking to a crowd, his mother and brothers are outside, wanting to speak to him. Someone says, “Your mother and brothers are standing outside wanting to speak to you.” He says; “Who is my mother, who are my brothers?” Pointing to his disciples, he says, “Here are my mother and my brothers. Whoever does the will of my Father in heaven is my brother sister and mother.”  So, the something more we are hardwired to seek is more than attachments.

But what it it?  Won’t we be lonely without attachments?  The commission established by MP Jo Cox before she was stabbed to death calls for a national strategy for loneliness, and a minister responsible.  The report concludes with an ageing society and a rise in the use of social media, 9 million adults are often or always lonely, a lonliness deadlier than obesity or smoking 15 cigarettes a day, and three-quarters of GPs say they see up to five patients every day who are lonely. Loneliness estimated to cost employers £2.5bn every year.  Mmmm...

Perhaps then, the something more is 'membership', including religious membership, for the lonely.  No, I say again, Jesus came for those who do NOT belong, to outsiders, to the unhealthy, the marginalised, tax collectors and sinners.  This something more, is more than membership with other people.  Maybe it is visible worship then?  No, once again, there are worship services with a few participants and 100 prayer candles burning, witnessing to an unseen world, a world of those who pray, but those are not seen by visible worship.

But what is this something more then?  In a font in the parish of St Martins in the Fields in Trafalgar Square, is an engraving of the infant Jesus attached to the globe of the earth by his umbilical cord.  The something more is the incarnation of God as a human being, ultimate reality in the flesh, because enfleshment is a way for us not to be confined to the limitations of being human anymore, such as our attachments, our membership, or our visible worship.  It goes beyond the limits of the body and the mind, and without such boundaries, we find union with God in vast boundless limitless spaciousness in his cosmos.

God is the something more, more than a mere thing. God is not made of any thing, God is the no - thing who is also the unmanifest something we don't need to seek, because in the incarnation of God as human, we realise we share God's nature, we can stop worshipping things, we can know the divine, the All One who is more than our little body and mind.

God became human, so humans could become God, and experience Christmas every day, not in attachments, religious membership, and the world we see with our eyes, but in knowledge and practise of something reaching into and entering something less.  If we take this incarnation seriously, all our subsconsious cravings and aversions, all our thoughts feelings and sensations, are embraced by the one God of the universe, and we have limitless union, it pulls us out of ourselves and into Godself. Mary, meanwhile, reminds us humans are part of the whole - in these bodies to be God bearers like her, to find inside, accept, and then to give birth to eternal life.

Just as the incarnation is for all year, Mary is for all humans, not the religious.  Anglicanism, the Church of England, began in the 16th century with a break from Rome, but Catholic is not Roman, Catholic comes from two Greek words Kat and Holos, meaning of and whole.  Mary teaches us we are all part of the whole, protestant or not, religious or not.

But now in the 21st century, in our flesh, in our body work, in our spiritual practise, our silent prayer and meditation, we sit on all three legs of Mary’s handmaiden’s stool, and scripture, tradition, and reason are all one in our flesh, which finds union with the infinite, and we are God bearers, the whole experience, in this body like her to find inside, accept, and give birth to eternal life, not religious life. The company of the divine is available to all those can sit alone and practise in silence with the divine for company. 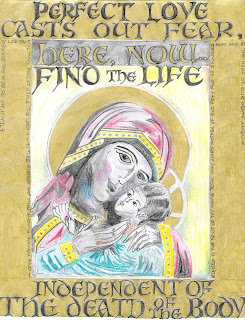 In the film City of Angels, a young heart surgeon called Maggie discovers this,  She is holding a man’s heart in her hands when she realises life and death are not actually in her control at all, and she doesn’t know what to do with that.  She learns she is in the arms of the Angels, who speak to us as we think create and pray, who appear as we are dying, who guide us to new forms of life.  Nature is an extension of a subtler, unseen energies of God, and Angels are a way of communicating overwhelming brightness to dense beings. But we don't have to be dense.  Psalm 8 tells us we are a little lower than angels.

Angels do not look like us, but we visualise them like us to help us to understand.  They are really forms of consciousness beyond ours but related to ours.  The top three are divine love, divine presence and divine knowledge, the lower levels are our guardians, to help us embrace the inevitable suffering of a human vocation and find our meaning in life.

Our English word Angel comes from a Greek word Angelos, it means messenger, a messenger to every listening human heart and mind, for all those who have the ears to hear, anyway, as Jesus would later go on to say.

So the Angel Gabriel visits Mary in the gospels.  As well as Gabriel the Bible mentions Michael, and other Angels, like Raphael and Uriel. Angels are mentioned nearly 300 times because a human is a spiritual being experiencing the mind of God beyond the confines of an individual brain.

Tradition and Reason also recognise this.  In medieval times we acknowledged many levels of mind between humans and God.  Angels are infused with the Holy Spirit, they appear as channels for divine communication, and say things in us.

‘Greetings, favoured one! The Lord is with you,’ as Gabriel says to Mary.  Mary’s experience becomes the basis for the tradition of prayer which says 'Hail Mary full of Grace, the Lord is with thee.' Gabriel continues, ‘Do not be afraid, Mary, for you have found favour with God.’ This becomes 'Blessed art thou among women', just as Gabriel’s next words to Mary, 'you will conceive in your womb and bear a son, and you will name him Jesus', become 'blessed is the fruit of thy womb, Jesus'.

As part of the whole experience then, humans who are not totally identified with the flesh, are not liiving in its fear, and we can use it to participate in divinity, and like Mary, serve God in it, with no hesitation, no matter the pain it costs us. 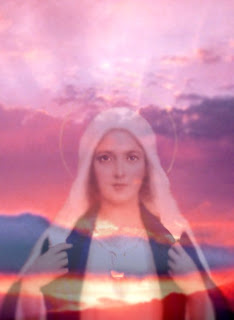 This is why the Hail Mary goes on to say 'Holy Mary, Mother of God, pray for us sinners now and at the hour of our death', because there are aspects of reality most humans resist for fear, and this resistance is sin, dissonance.

Mary says for us ‘Here am I, the servant of the Lord; let it be with me according to your word.’ We have something to learn from her in every moment, the acceptance of suffering as the inevitable result of the acceptance of birth, which opens us to acceptance of union with God.

If we resist, rather than accept, as Psychiatrist Carl Jung said, whatever we resist persists, and suffering will increase. Or not. This is why St Paul is told in scripture to stop kicking against the pricks, to go with God's will.  Scripture says darkness and light are alike to God, but in resistance to darkness we fail to notice how our lives touch others with light.

So, think of something you are resisting, perhaps because you are scared or don’t understand, or want to avoid the pain.

This is the message - accept life, no matter how difficult life is, no matter the way life needs to take you, not because it makes sense, not because it never changes, not because you are in control, but because it is God’s will for you is to say yes, to be a God bearer like Mary, facilitating birth growth death & new life, finding inside, accepting, and then giving birth to eternal life. This is Mary’s gift to us.  She said yes, in the here and now, not no, I am too scared, I don’t understand, I don’t like change, I don’t want the pain.

In the film Dr Zhivago, Zhivago, to the question, 'Are there things in the world that claim our fidelity?', answers 'Very few.  We ought, I think, to be faithful to immortality, which is another name, a richer name, for life.  We should be faithful to immortality, faithful to Christ.  Why to Christ?  Because once upon a  time there was maiden who in silence and in secret gave life to a child and gave the world life, the miracle of life, the life of all things.'

Mary is a model for our human yes to the life of all things, of the whole, Kat Holos, our union in the arms of the Angels with immortal no-thing. She and we practise a Yes, not to religious life, but to eternal life.  We are in these human bodies to find inside us, to accept, and to give birth to eternal life.

In spiritual work, we have the infinite capacity to respond, to be responsible, to accept that the way things are is the way things are, and that we are as a Mother to the Universe.  Hail Mary, full of grace, the Lord is with thee.  Blessed art thou among women, and blessed is the fruit of thy womb, Jesus.  Holy Mary, Mother of God, pray for us sinners, now and at the hour of our death.