You - the eye of the storm 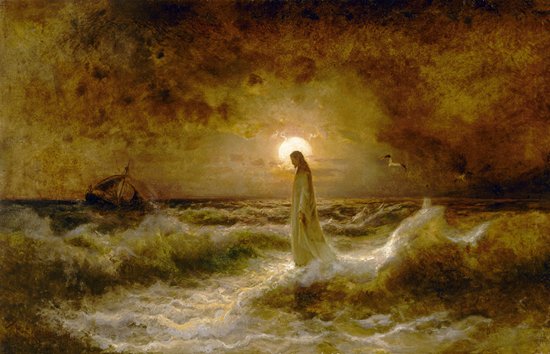 But St Paul described something else called being ‘In Christ’. His first letter to Corinth, Chapter 15, verse 22, says “for as all die in Adam, so all will be made alive in Christ.” He doesn’t mean the historical human Palestinian Jew called Jesus, but the boundlessly aware being that he embodied, and we embody. So boundless the New Testament tells us that the whole universe is in Christ. So what if we are not a human body, or even a human mind?

If you abandon your personality, the physical emotional mental boundary you are used to, but now, rather than at physical death, the source of the universe is the mystery you already are. I am not a sensory thing but one boundless consciousness, no longer identified with a human body or even a human mind. We humans seek this.

If we give up seeking it physically we try emotionally. If you are romantically in love this will widen your boundary with a very strong force. But emotions can and do turn negative, and they recede before the intellect too. Beyond the intellect is the boundaryless we call God, and stories of Jesus show he rarely respects natural boundaries everyone is so used to.  There is something scary about that, but liberating, so Peter’s desire to join Jesus on the water expresses our own desire to transcend nature from within the mud and water.

To have faith is to be willing to throw oneself into a disorderly world and to expect to encounter God and transcend the normal, wander into unfamiliar but wonderful terrain. In Matthew’s gospel, the story of Jesus walking on disorderly water becomes a story of Peter sinking into the same water.  Peter tells Jesus to call him, and over the centuries this has fed Christian reflections on what it means to have faith in difficult circumstances. As my favourite football song says it; ‘When you walk through a storm, hold your head up high.’

Peace is not the lack of a storm, it is the eye in the storm. The eye of calm at the centre of a hurricane of severely raging and tearing winds is God in us, breaking the natural boundary of sense emotion or intellect. None of this is about removing the storm.

In their search for the boundaryless in the storm Peter and his companions struggle as the storm batters their boat. The sea, in a Hebrew worldview, is unknowable chaos and danger. They hallucinate a ghost, terror is on them. Psychiatrist Carl Jung said the year of my birth “One does not become enlightened by imagining figures of light, but by making the darkness conscious. The latter procedure however is disagreeable and unpopular”  We humans do contain a lot of stuff that is very unpleasant to look at, but these natural storms are not just natural storms, they are God’s means of transportation, to reveal who I am. The Greek translation of the Bible understands God as the fullness of Being, our Being, all Being. This spiritual process is to go beyond boundaries we draw for ourselves to know the immensity we are.

So when Peter steps out of the boat, of course he enters a tumult. His motive isn’t to escape threat, but to go to where Jesus defies and reorders the assumed boundaries. Incredibly turbulent places are thin places, to use a Celtic phrase, where God is seen to break through, and we appreciate how the energies of the universe have their source in an essence which is all of us. This participation in the divine nature the Orthodox Church calls Theosis, becoming God. But science has also shown everything is energy and nothing is energy’s essence. God isn’t a thing, but unlimited potential.

Jesus in the storm is the first passage I preached, and if I had known then what I know now, I would have opted for safety instead. But boundaries are redrawn when chaos seems to get an upper hand.

It is only in the storm we see I am the boundaryless. I am not the body, I am not even the mind, I am who I am, as God tells Moses in Exodus. “Tell people I am has sent you.” People have expectations, so things rarely go as we want. But this boundaryless I am in each and everyone of us, this uncreated consciousness, this inner Christ, isn’t believing miracles, it is being one.

Modern science has shown us everything physical is energy and nothing is the essence of energy, as Psalm 46 says, ‘Be Still, and know that I am God’. In the little boat of bodily experience, as waves and spray of emotion rise and fall, which they do, and the physical creaks and rolls, which it does, so all feels lost, which it will, the I am which cannot be experienced, but is still real, is in you and in your neighbour, in the wind and sea. Jesus said; ‘I am with you always, until the end of the world.’

So in scripture none of this requires the absence of the storm, it is not identifying with the storm. You are the eye of the storm. Isaiah 54:10 says; ‘the mountains may depart and the hills be removed, but my loving kindness and covenant of peace will not’. John 16:33 says; ‘In the world you will have trouble, but cheer up, I have overcome the world.’ John 14:27 says; ‘I give you not as the world gives you so do not let your heart be troubled or afraid’

Biblically speaking then the heart isn’t a fleshy beating pump that dies, a collection of human emotions to eulogise even as they go wrong, but who you really are. Truth, consciousness, bliss, the Experiencer, the experience of God in creation, or as St Gregory of Nyssa described, a trinity of being, knowledge, and love. This is not about the love of someone else, that is still so full of our expectations. It is Love itself, yourself. Be still, and know that I am.